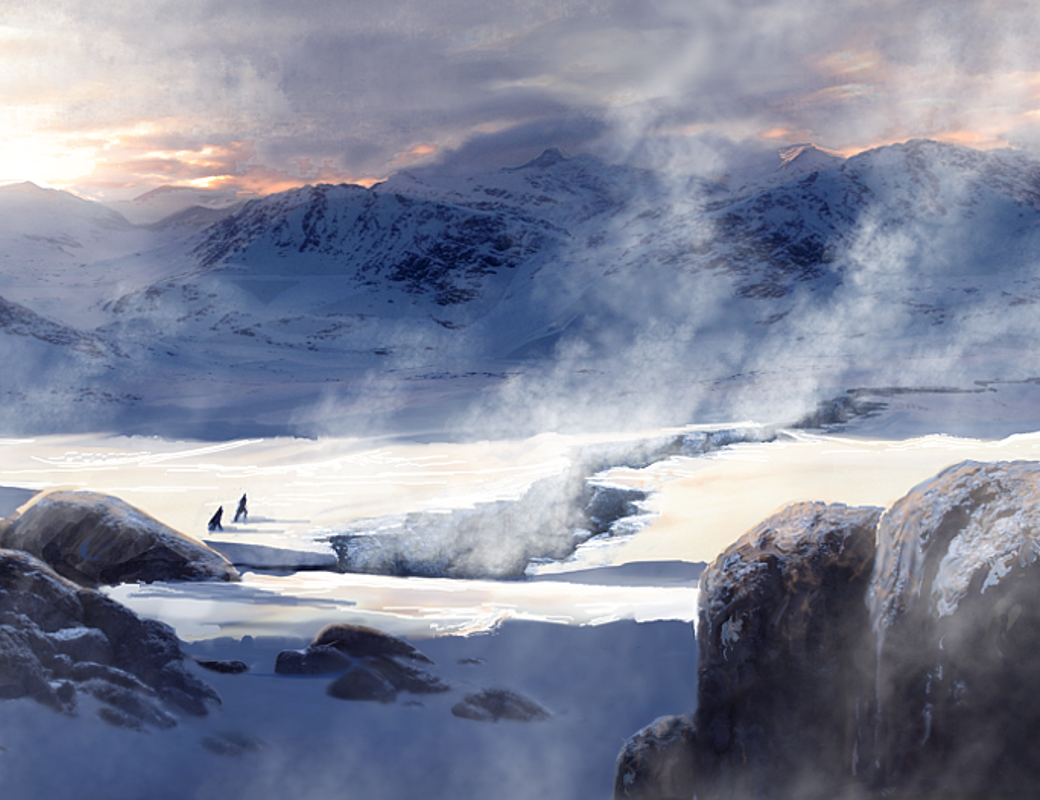 When a Free Software evangelist is asked whether there is a free graphics program that can rival with the proprietary apps, the usual answer is “GIMP!”. However, many hardcore Photoshop users claim that GIMP is lacking, or confusing, or poorly implemented. Evelyne Schulz disagrees. 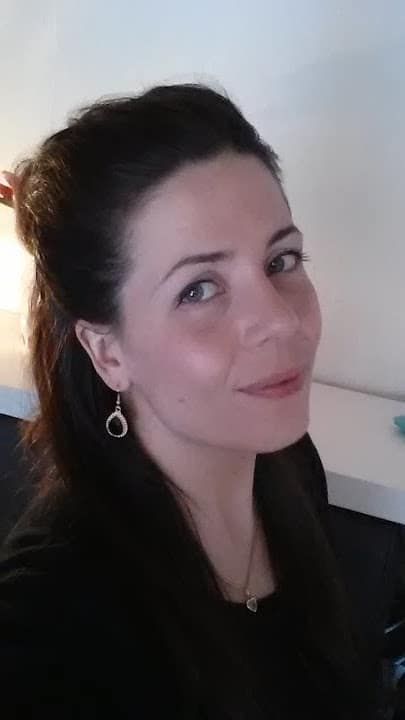 Evelyne Schulz (aka eleathyra), is a Danish artist that uses GIMP to conjure images from a realm of magic and fantasy. Her paintings then go onto the cover and the inside of books. Her work is highly regarded by other electronic painters who are often surprised with her choice of tools. She talked to us about her projects, her art, and why she prefers GIMP to alternative proprietary drawing apps,.

Paul Brown: Hello Evelyne. Welcome!
Evelyne Schulz: Hello! And thanks for inviting me.

Paul Brown: So, tell me, why do you use GIMP instead of some other proprietary software?
Evelyne Schulz: My first computers only ran Linux (and KDE), and GIMP was what my brother recommended to me. So I basically grew up with GIMP. Today I’m so used to it, that I often get a bit frustrated trying to paint with other programs. At work (my daytime job) I use Adobe products, but not for painting.

Paul Brown: Oh! What Linux were you using? Do you use Linux now?
Evelyne Schulz: I was using SuSE Linux back then. I don’t use it any more today, since I need Windows for my job. At home I also have a Mac. It’s nice because it’s a Unix system deep down.

Paul Brown: And you run GIMP on your Mac?
Evelyne Schulz: I used to, but the for the past year I’ve been using it on a Windows computer. I often work from home so it’s just easier to have the same system.

Paul Brown: You say you grew up using GIMP. At what age did you start using it?
Evelyne Schulz: I think at about 13 (1997), but I don’t quite remember. It was a bit unstable back then.

Paul Brown: I can imagine. Did you go to art school or are you self-taught?
Evelyne Schulz: I went to art school, but decided to do something with computers afterwards. So, after art school, everything art related was moved to my free time. My teacher in art school said it would be better and I chose to listen to him.

Paul Brown: So you studied computer science?
Evelyne Schulz: Kind of. The profession is called “Mediamatiker” — “Media Expert” or something like that. It’s a bit hard to explain since it’s a profession that doesn’t exist in most countries, but it’s kind of a mix between graphic designer and IT person. 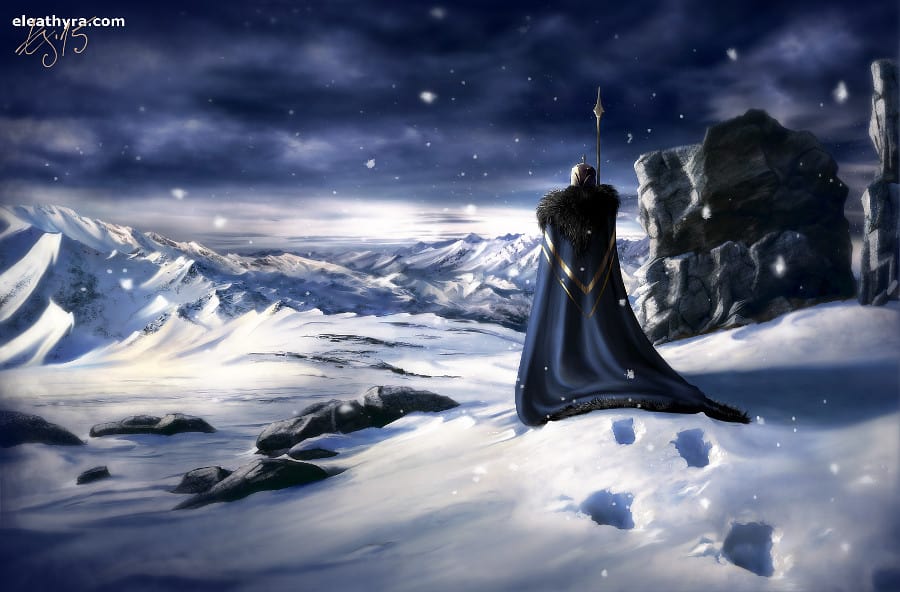 Paul Brown: Is this also your day job? You do graphic design on a computer, right?
Evelyne Schulz: Some of my job is doing graphic design, yes. I’m working at a printing company, so I do some layout, but also a lot of print file checking, adjusting, sending print jobs out, setting up book covers… I’m very lucky that no day is like the other. Some people need a lot of help, others just send us the designs and we have to check the files, maybe adjust a bit, and print it.

Paul Brown: And, let me guess, most of the software you use is Adobe, correct?
Evelyne Schulz: Pretty much all of it, yes. I mostly use InDesign, Illustrator and Acrobat.

Paul Brown: How about the most direct competitor to GIMP, Photoshop?
Evelyne Schulz: Only if clients send me photoshop files. If I have to do creative work myself, I use GIMP. Some clients also send GIMP files and are surprised I can help them with all their problems.

Paul Brown: You mentioned that you get frustrated if you have to use anything that is not GIMP for painting. Most if the time I hear the opposite from designers, that GIMP is inconvenient and clumsy. Why do you think that is?
Evelyne Schulz: Oh yes, I hear the same all the time. People keep telling me that GIMP is super complicated and they just can’t find out how it works. I really think the main reason is that I’ve been using it for a very long time. I know how GIMP behaves, where I find the functionalities I need… I just think people are impatient. But then, I’m no different with other programs.

Paul Brown: I think people like what they get used to. How do fellow artists see your use of a Free Software tool for your work? Are they surprised?
Evelyne Schulz: Yes. Many react very surprised. Some because they think “free” equals “bad”, some because they tried out GIMP and couldn’t find out how it works. Just last week a colleague from our marketing department came along and said: “Whaaat? Why aren’t you using Photoshop? it’s right there on your desktop!”. So I have to explain the same thing a lot. I totally think GIMP is brilliant. You just have to spend some time learning how to use it.

Paul Brown: Have you converted anyone to GIMP yet?
Evelyne Schulz: Maybe, but then I wouldn’t know. I do think some of my followers online see GIMP in a different light today because they see and like my pictures. Some of my clients also, mostly those that tried out GIMP because they had a low budget, and I could show them it really can be used to create great designs if you know how.

Paul Brown: Let’s talk about your art itself a minute. You are producing covers for some fantasy books right now, right?
Evelyne Schulz: I sometimes do covers, yes, mainly because I’m in touch with a lot of people that publish books through my daytime job. I did the cover plus a series of illustrations for a fantasy book that came out in October 2015. 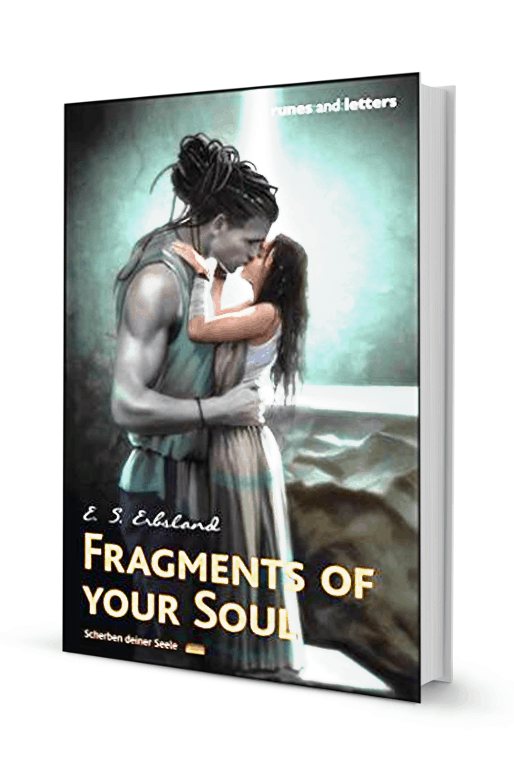 Paul Brown: What’s the title?
Evelyne Schulz: The English title is “Fragments of your Soul”. The original is in German though, “Scherben deiner Seele”. It’s the first part of a series, and I’ll also do the cover for part two, but that will be next year.

Paul Brown: Where do you draw inspiration for your pictures?
Evelyne Schulz: The ideas are created in my head, often inspired by books and music, often it’s a combination. The ideas for the actual “look” of the picture come from things I see, mostly on my way to and from work, or in movies. Sometimes, when I lack inspiration, I also browse through pictures online. Photos, art — it doesn’t matter.

Paul Brown: On your way to work? But your landscapes… Where do you work, Narnia?
Evelyne Schulz: No. I take the bicycle to work every day, two 35-minute bike-rides through Aarhus. It’s a nice and very bicycle-friendly city by the sea. It’s rather green compared to other cities, but it’s not like there would be awesome landscapes to look at. I often get to see very fascinating skies and cloud formations though. I think it’s more details you see, small patches of green, flowers in very unusual places. And thanks, I recently started painting more landscapes.

Paul Brown: The one you posted on G+, yesterday, I think, the marsh with the luminous fungi, is impressive. What is your process? What are the steps from concept to final work?
Evelyne Schulz: Thank you. The inspiration came from one of my followers. When I read the description a picture was created in my head, that’s usually the first step. Often I’m not quite sure about the colour scheme, sometimes I am. Then I just start. If not I browse pictures to find a colour scheme I like. It doesn’t really have to have much to do with the picture I’m trying to paint, as long as it is a nice looking composition.

The process of creating the picture I find hard to describe and I also think it’s very personal. I tried doing a few videos and step by step pictures, because many people ask about it. It’s easier to show than to explain. 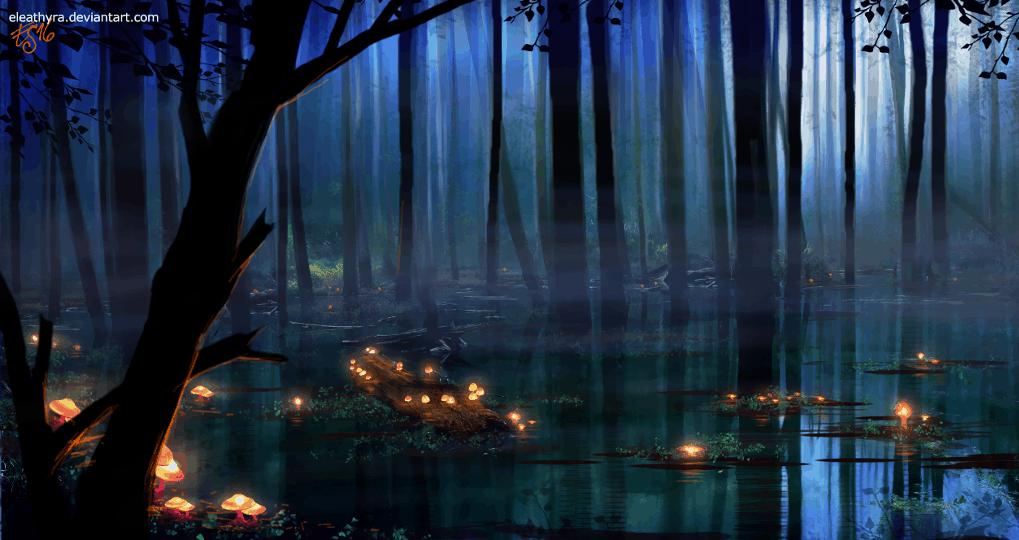 Paul Brown: Do you use photos for reference? Do you sketch on paper first?
Evelyne Schulz: When I made the switch from traditional to digital art I kept sketching on paper first for a few months, but then I started doing everything digitally. I sometimes use photo references, sometimes not. Same goes for photo textures. It depends a lot on the picture. For human faces and hands I usually use references.

Paul Brown: Where can our readers see more of your work?
Evelyne Schulz: Either on my account at Deviant Art or on Art Station. I also have a blog where I post fantasy art (not only mine).

Paul Brown: Do you have a place where people can buy prints or give donations?
Evelyne Schulz: Yes, I do offer some prints, but this was mainly intended for some fanart I did a while back and many people were asking for prints. I don’t take donations. If your readers would like to support me, I suggest they share my art with the correct source, buy a commission or a book. I’d be very thankful. The more people see my art the better. It’s the best advertisement.

Paul Brown: What are your projects for the future?
Evelyne Schulz: I don’t really have any personal art related projects at the moment. I’m looking forward to doing a new series of illustrations for “Fragments of your Soul 2”. Until then I’m trying to get better at painting landscapes and doing some more tutorials, because they actually seem to help people. I enjoy helping people, especially with learning how to use GIMP. 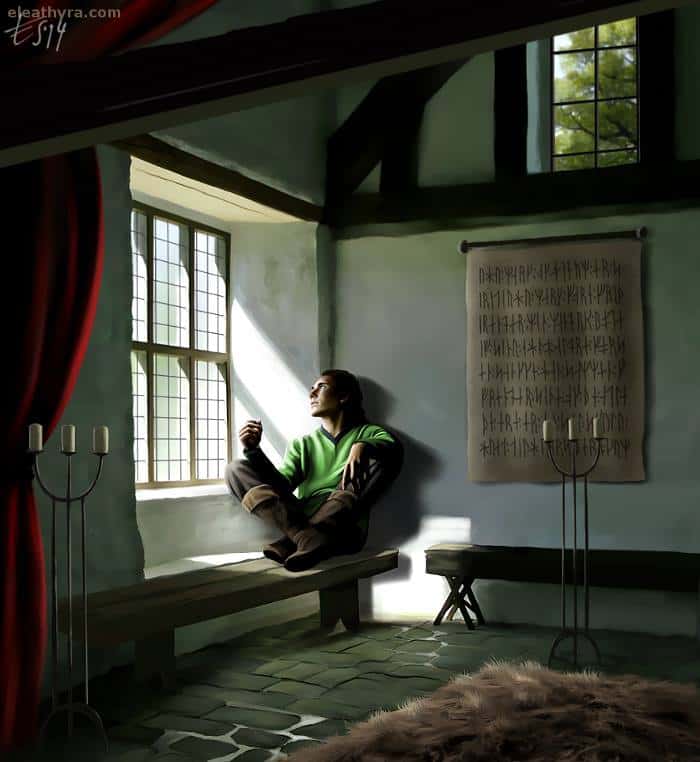 Paul Brown: Just one more question related to GIMP. Is there anything you miss that you would like to see included in the program? Or anything annoying that you wish the developers would solve?
Evelyne Schulz: Well, yes, but it’s rather hard to explain. I think the brush dynamics could be improved, it’s very hard to draw natural looking lines. It doesn’t matter so much for “painting”, but doing outlines is very difficult. Other programs I tried, like Krita and Paint Tool Sai, can do lines that fade out perfectly. in GIMP it’s almost impossible. So, for instance to paint grass details, I simply can’t paint the tips of the grass. I have to draw a line and then “smudge” it into shape.

Paul Brown: Oh… You also use Krita then?
Evelyne Schulz: I installed it about three weeks ago, but I’m still only experimenting. There’s a picture of a desert in my gallery that was partly made in Krita, and finished in GIMP.

Paul Brown: Nice. You must keep us updated on how you get on. Anyhow, it has been a pleasure talking to you and thank you for your time.
Evelyne Schulz: It was a pleasure — thanks so much.

Read the first part of this series in which we talk with David Revoy, creator of Pepper&Carrot, about Krita.

Read the third part of this series in which we talk with Tom Carlos, an artist who uses Inkscape to draw dreamy landscapes and sharp portraits.